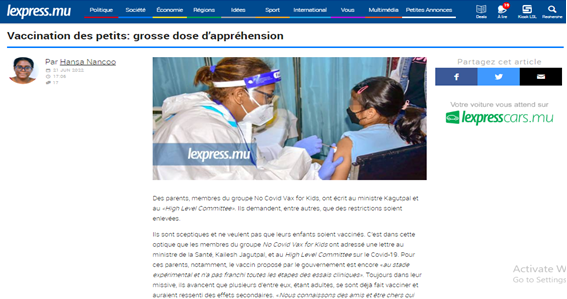 On the 21st June 2022, L’express a media house in Mauritius published an article entitled :
“Vaccination des petits: grosse dose d’appréhension” (Vaccination of children: a wave of apprehension), which includes statements from the group No Vax for Kids and their spokesperson Alain Sheraton. Some of the claims that were made by the group and its spokesperson seemed quite dubious :

How have we proceeded with the fact check?

Why does Dr Malone’s statement which is cited by the anti-vax group seems fishy?

The media organisation quotes Alain Sheraton, spokesperson for the group No Covid Vax For Kids who referred to an existing misinformation by Dr Robert Malone. The American physician believes that the covid vaccine might produce harmful proteins and that its effects on children are irreversible. However, the author of this article, Hansa Nancoo, chose to post the claim of the spokesperson which relied on the medical practitioner without feeling the need to verify the latter’s profile. The article of l’express does not make any reference to the multiple controversies which have occurred during the pandemic about the claims which Robert Malone has made. The latter presented himself as the inventor of the mRNA vaccines on his Twitter profile which has been proven to be wrong by Politifact and international news sources like New York Times. He has indeed contributed to the technology, but there are multiple other researchers who have been instrumental in this area, including Dr. Drew Weissman and Katalin Karikó who won prestigious medical prizes.

It is surprising to see that both the journalist of L’express and the interviewee did not make any effort to check the authenticity of the information and the profile of the practitioner considering that his Twitter account was even banned for spreading fake news around Covid-19 jabs and that he is known for having a history of misinformation. An article published by BBC news on the 31st January 2022 reads “Dr Malone was banned from Twitter in December last year for violating its covid misinformation policies”.

Does the vaccine produce toxic proteins?

The claim of Dr Malone as highlighted by the interviewee Alain Sheraton asserts that:

“This risks producing toxic proteins. And the effects are irreversible”

A review published on the 20th December 2021 by Health Feedback, a website providing health information which is funded by Facebook, Tiktok, Google News Initiative and the University of California Merced among others completely contradicts Dr Malone’s claim by stating that “the spike protein generated from vaccines is cleared from the body after a few weeks and primarily remains at the site of infection”. Previous fact-check exercises conducted on the topic by AFP fact-checking have equally demonstrated that there has not been any scientific evidence to validate the physician’s claim. Instead of producing ‘toxic proteins’, the Centers for Disease Control and Prevention (CDC) confirmed that mRNA vaccines have been proved to produce antibodies which prevent individuals from getting sick. 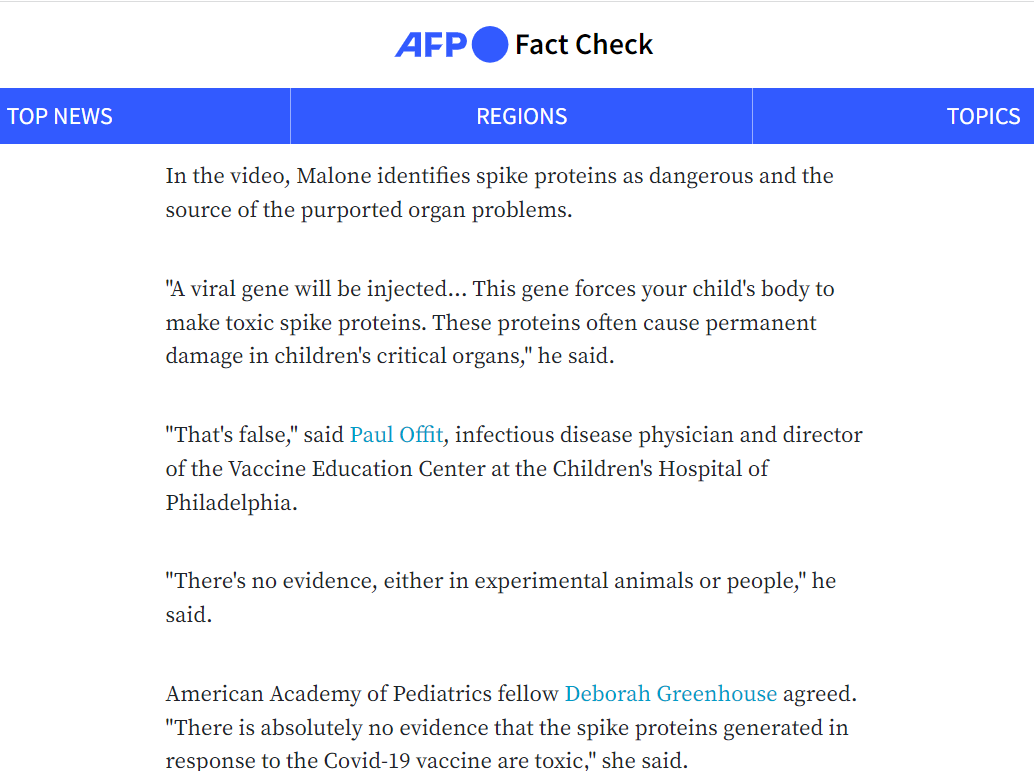 Information on the Messenger RNA

CDC highlights the fact that researchers have been studying and working with mRNA vaccines for decades.

Examples of the messenger RNA vaccines would include the Pfizer-BioNTech vaccine. This vaccine is being shipped to many parts of the world to protect oneself from the virus as reported by Pfizer.

“He even said that children have a strong enough immunity and that they do not need this vaccine.”

Immunity is the collective term for the physiological processes that allow a person’s body to identify substances as alien and neutralize, remove, or metabolize them without causing harm to its own tissue. Here, Alain Sheraton is referring to a claim stated by the ‘misinformation star’ Robert Malone, that all children worldwide, without the exception of those with innate immune deficit or with any type of comorbidity, have the same level of immunity.

This particular sentence doesn’t seem to make any difference between children of different age groups, as well as children who may have different levels of immunity or who may have comorbidities. An article published by The National Library of Medicine states that a person’s immunity is based on hereditary or non-hereditary influences. Another article on the same website mentions that new-borns and premature babies tend to have weak innate immunity as compared to when they would grow up. However, Alain Sheraton’s statement groups together all children and asserts that all of them have exactly the same level of immunity, which according to him is strong enough and therefore they would not need the vaccine.

What does the WHO suggest about the vaccination of children aged 5-11?

The WHO recommends countries to use the Pfizer vaccine in children aged between 5-11 with comorbidities. Moreover, a recent article published on the WHO highlights the fact that the Government of Mauritius will provide Pfizer vaccination to around 307 educational institutions. This campaign has been made possible under the supervision of the Ministry of Health and a representative of WHO named Dr I. Hazarika, who have assured the population that the vaccination is safe and crucial for the children.

Why are young immune systems still on the top?

An immunologist at the Murdoch Children’s Research Institute (MCRI) in Melbourne, stated that “children recently infected with SARS-CoV-2 have been found to have higher levels of activated neutrophils, cells that are on the front line in the response to unfamiliar invaders. Neutrophils ingest viral particles before they have a chance to replicate“. Thus, the innate immune system in kids have the power to fight coronavirus, hence proving Sheraton’s claim to be partly true.

“The government’s proposed vaccine is still “in the experimental stage and has not gone through all the stages of clinical trials“.

In this claim dated 21st June 2022, the group No Covid Vax for Kids states that Pfizer, the vaccine dedicated to children under 12 years old in Mauritius as well as for people over 40 years old as shown in the communique of the Economic Development Board, has not gone through all the stages of clinical trials.

Despite the fact that he was in a conference against 5-11 years vaccinations, in his statement, Alain Sheraton does not clearly state whether he is targeting the vaccine that was made specifically for the 5-11 years old or is he generally speaking about the vaccine for any age group.

It should be noted that Pfizer has split the vaccine dosage according to different age groups as follows:

Each category has its own different clinical trials carried out by Pfizer/BioNTech.

According to the Food and Drug Administration’s conditions , a vaccine in the US requires having undergone a minimum of 3 phases to clinical trials before it is approved and licensed. It can be seen that Pfizer has completed its phase 3 of trial, based on 3082 children aged between 5-11, as published in a report by the World Health Organisation.

However, it is possible that the vaccine has been studied during 2021 against all variants of SARS-CoV-2 that had developed in that particular time span. The European Centre for Disease Prevention and Control shows that Omicron had developed other sub-variants namely BA.4 and BA.5 in January and February 2022 respectively.

Moreover, according to Defimedia.info cases of Omicron BE have been reported during the month of July 2022 in Mauritius as well, that has not yet been documented by the WHO.

Hence, it can be said that the Pfizer/BioNTech vaccine has officially completed all stages of clinical trial for approval. However, its efficiency against new sub-variants which have emerged after approval has not yet been proved. Additionally, there have been counter studies concerning Pfizer (BNT162b2) which show that the 5-11 years olds’ vaccine’s effectiveness has significantly declined and that they showed less protection against Delta. In this case, there is no evidence yet to prove that another clinical trial can be expected to be carried out by Pfizer/BioNTech concerning the 5-11 years olds so that the suitable dosage of a shot can be reconfirmed against Delta.

The period of Covid-19 has undoubtedly witnessed a surge of vaccine misinformation and unfortunately, Mauritian media organisations like L’express seem to be encouraging such practices occasionally. The spokesperson of the group along with the newspaper can be perceived as contributing to the spread of misinformation. It is irresponsible of L’express for not verifying the content before publishing to prevent this misinformation  spread considering that vaccination for kids is a sensitive topic.

Upon using reliable sources of information, it has been shown that the claims stated by members of the group No Covid Vax for Kids are partially false. The first claim is incorrect and the two last claims are misleading.

Under the supervision of Christina Chan Meetoo